When Is A Case Not A Design? 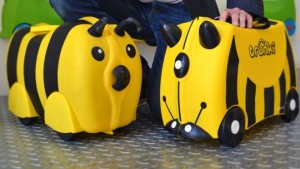 You may have seen on the news this week that the founder of Trunki – a children’s ride on suitcase is “devastated” at losing a Supreme Court ruling against rival company Kiddee Case.

This case is being heralded as a decision that will “create chaos and confusion among Britain’s design community.” But will it?

Perhaps the bigger issue here is a lack of foresight by Magmatic in registering the correct legal protection.

It’s all very well for Rob Law to say he can’t understand, but having previously attended a talk by him a while back, I felt that he appeared not prepared to spend money on protection at the outset and wasn’t either being given or listening to the correct advice moving forward.

The outcome of the case (no pun intended) came down to “overall impression created by a design”, which in Trunki’s case was “an animal with horns” whereas the Kiddee Case was either “an insect with antennae or an animal with ears”. It’s not a huge difference but enough for the ruling.

It would seem that Kiddee Case saw a gap in the market for a discount children’s case.

So is it a big loss for designers? No, in my opinion; the law is as it has always been and it’s a fair decision.

The message for designers going forward is “Don’t economise on protection – you’ll end up paying a fortune in legal fees to try to put things right (and still probably fail)”.

For more information on protecting your brand and designs please talk to us.