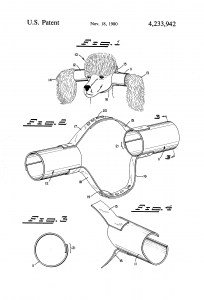 We can see the thinking behind this in that some breeds of dog, like spaniels, do have long, droopy ears, which can easily get covered with whatever they’re eating or drinking, but to be honest we think it would probably be a whole lot less hassle to give their ears a clean after meals than to try to get the average dog to wear what is essentially two supersize scrunchies joined together by a hairband.

Hiccups can be really annoying, but we’d be hesitant to turn to this purported remedy, which literally aims to stop hiccups by delivering an electric shock to the sufferer. For the record, the NHS advises that short-term hiccups usually clear up by themselves and longer-term hiccups may be an indication of an underlying medical condition or a psychological reaction.

If you’ve ever wanted to release your high spirits with a high five, but found yourself in an empty room or, worse still, in a room with someone who doesn’t want to high five you back, then the high five machine could be for you. At least, that’s what the holder of this patent thought. We’re not so convinced.

This is arguably a classic example of “so year and yet so far”. In principle, this is actually a proto-version (1995) of the protective masks, which are used as standard by first aiders when giving mouth-to-mouth resuscitation. Unfortunately, the patent refers to the invention specifically as a “kissing shield”, which is hardly the most romantic of images, even if the device is shaped as a (love) heart.

By this point in time, there’s probably a fairly widespread degree of awareness about the damage which can be caused by the sun’s rays and how important it is to cover up whenever possible. Hence, on one level, this invention makes sense. On another level, a more practical level, however, it’s basically a towel with holes in it and it’s rather hard to see how the patent holder could seriously hope to enforce their patent if they happened to come across someone on a beach who had covered themselves with a holey towel. On a more practical note, however, the patent lacks any means for the user to secure the towel to their face, which means it could only be used when they were lying down completely horizontally and keeping their face both full upright and completely still. We can think of many, more versatile ways of achieving sun protection.

In principle, this invention should have a lot going for it. As any cyclist will know, pedalling can sometimes be hard work, particularly when you’re going uphill into a wind. There are, however, two major issues with this invention. The first is that in order for a sail to be effective, it needs to be managed and we’d feel uncomfortable trying to manage a sail along with the core of the bicycle. The second is that we can see all sorts of opportunities for the sail either getting damaged or being damaged in the real world, where cyclists have to share the road with everyone else. Finally, of course, there’s the question of how useful it would be on days when there is no wind…