Trademark football, when it’s not about the game 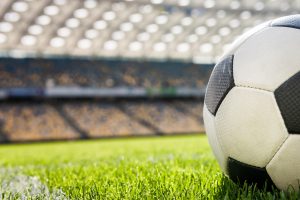 Football may indeed be a beautiful game but these days it’s also business, very big business.  Top players can command eye-watering wages from their clubs because their clubs can meet their demands through merchandising and sponsorship deals in which these players can have an important role, since fans are often eager to buy goods and services associated with their sporting heroes and favourite club(s).  As a result, some of football’s most (in)famous battles have taken place off the pitch, as clubs seek to protect what they consider to be their intellectual property.  Here are four of the most notorious scraps.

After The Spice Girls went their separate ways in the year 2000, what Victoria Beckham really, really wanted was to stop Peterborough Football Club from trademarking their nickname “The Posh”, by which they had been known for about 80 years.  Her objection was rejected and the club was allowed to register the name.

Arsenal attracted widespread ridicule in the press when they sued the owner of a small hat shop in Seville, Spain for calling her shop “Arsenale”, arguing that there was a risk of confusion between her shop and their brand.  They won their case even though the spelling and pronunciation of the Spanish name are different from the English version.  Although Arsenal justified its actions on the grounds of protecting its brand, it could probably have lived without the negative publicity.  It’s interesting to wonder whether the Specialised bicycle company had read about this case and the furor surrounding it when they were faced with a similar situation when they discovered a small, Canadian cycling shop using the name Cafe Roubaix, even though Specialised held the trade mark on the term Roubaix in Canada.  Specialised initially threatened the owner, Dan Richter, with legal action, but backed down after internet outrage from the cycling community.

It has recently emerged that a company called Meadows, which owns the ground on which Dulwich Hamlet played (until being evicted) has registered the terms ‘Dulwich Hamlet Football Club’, ‘The Hamlet’ and ‘DHFC’ as trademarks and forbidden the football club from using them.  While the trade marks were registered last October, it appears the club has only been informed of them now, which means that the initial period for registering objections has now passed, however, the club is by no means without legal recourse or without financial support and so it can probably be safely assumed that they will seek to have the trade mark invalidated.  They have now found another pitch on which to play out the remainder of the season and have substantial support from the local public, the press, footballing celebrities (particularly Rio Ferdinand) and the Mayor of London, Sadiq Khan, so it would appear that this match is far from over.

Back in 2016, the Wanderers acted swiftly to threaten Scottish craft beer company BrewDog with legal action after the latter created a logo featuring a wolf’s head drawn in an angular manner for a new beer called Lone Wolf.  The Wanderers claimed that it was too similar to their own trademarked designs and BrewDog backed down.  Now it is the Wanderers themselves who are on the receiving end of the complaint, filed at the High Court in London on behalf of a Mr Peter Davies, who claims that he created the logo decades ago as part of a competition to design a logo for another sports club.  He didn’t win but his work was displayed and he believes an official for the Wanderers simply took it for their use.  If he wins his case, he stands to be awarded substantial damages.

What this continues to hi-light is the need to ensure that if something is really important to you or your company, that you protect it.

For more information please talk to us.