Memes and the Law – No Laughing Matter 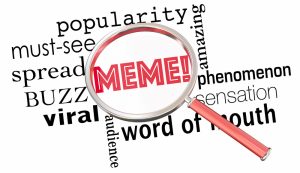 The word meme actually dates back to well before the internet went mainstream.  It was coined in 1976 by Richard Dawkins, who shortened the Greek noun mimene, which means something which is mimicked and used it as a way to describe how cultural ideas spread.  Fast forward to today and memes are some of the most popular content on the internet.  They spread quickly and can be used in all kinds of contexts.  For example, there is a photo of Gene Wilder as Willy Wonka which circulates the internet with countless captions and another one of “the success kid” (a baby with a triumphant expression, punching the air), which likewise appears in all kinds of contexts, many of them funny.  In fact, outside of academia, we probably spend more time laughing at memes than we do thinking seriously about them, but actually, they raise some interesting legal questions.

Memes generally consist of two parts, a picture and some text and the two parts are usually created by completely different people.  In fact, meme-creation may reasonably be considered the 21st-century update to the age old “caption competition”, where people looked at an amusing photograph and summed it up with a pithy statement.  Photos have to be taken by someone and hence have an owner, somewhere, but how clear this is can be very variable.  For example, the Gene Wilder photo is clearly a still from the 1971 film, Willy Wonka and the Chocolate Factory, while a bit of digging on the internet reveals that “success kid” is Sammy Griner and the photographer his mother Laney.  In many cases, however, the photographer is difficult to impossible to identify, as are the many people who create the various captions.

The principle of copyright is simple enough, creators of original works get to decide who (if anyone) is allowed to use them and under what conditions and, if they wish, they can transfer this right to another person or organization (with or without payment).  Of course, the exact details of what counts as original works, the level of protection on offer and the penalties for breach of copyright can and do vary by legal jurisdiction, as does the ease by which copyright protection can be enforced.  The matter of jurisdiction can get very tangled on the internet and that’s before you start getting involved in the issue of determining originality or “fair use”, where that applies.  Then there’s the simple question of whether or not copyright owners will see it as worth their while even to try to enforce their legal rights.  Getty Images notoriously pursued a blog for royalties related to their use of the “Socially Awkward Penguin” meme (arguing that the meme was based on an image from its library), but HBO seem to be perfectly happy to have Game-of-Thrones memes plastered all over the internet, possibly because it is free and effective advertising for the show (and possibly also because they prefer to avoid upsetting merchandise-buying fans of the programme).

Getty Images arguably provided a case study in how not to go about monetising memes.  It may be difficult to put a monetary figure on bad headlines, but the resulting slew of them can hardly have been comfortable reading for the company.  “Success kid”, however really did bring about a positive financial result for his family.  The Griners leveraged the publicity around the photograph to raise funds for medical care for Justin Griner, the baby’s father.  The difference between the two situations suggests that if you are able to create an original and successful meme, or take a photograph which is turned into one, the most effective way to monetise it would be to take advantage of its sharability for promotional purposes, rather than to try to licence it and charge for it.