Inventions that are now essential to daily life

How did we ever live without it?  There are some inventions which have become such an integral part of our daily lives that it seems literally impossible to live without them.  Here is a list of our 6 top picks.

It would be wonderful to know who first came up with the idea for the wheel (around 3500BC). Whoever it was enabled pretty much every form of transport known to man and also laid the foundations for other key inventions such as cogs and spindles, both of which have had a huge impact on the history of humanity.

Here’s an interesting piece of trivia.  The earliest timepieces also date back to about 3500BC.  Perhaps the invention of the wheel prompted people to start thinking of keeping track of their transport.  Mechanical clocks were invented in the 14th century.  Incidentally, Shakespeare famously has clocks chiming in Julius Caesar – even though the real Julius Caesar died in 44BC.  The importance of being able to measure time accurately has grown continually since those early days.  By the mid-19th century, the Belville family were literally selling the time to Londoners subscribed to their service and their company continued for around a century before it died with the daughter who inherited it from its founders.  Since then all kinds of modern activities depend on the accurate measurement of time, most obviously professional sports.

Nails were invented around 2200BC and have been in pretty much constant use ever since.  Like the wheel, they’ve also been reworked into other inventions, such as drawing pins.  Without nails, we wouldn’t have the houses we live in or indeed most of our furniture.

The first coins, as we would know them, were invented around 600BC and cash has been going strong ever since.  Over recent years, there have been an increasing number of newspaper headlines predicting its demise, now that we have e-wallets and contactless cards and yet cash hangs on, even in plac 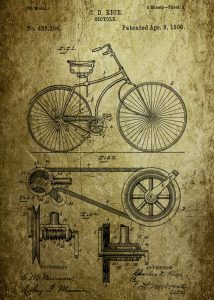 es where people often carry multiple cards with them.  Even if cash, per se, does disappear at some future date, the fact is that cash was essentially a convenient, standardised way of indicating and storing value and hence making it easier for people to transact with each other.  Looked at from this perspective, there’s a strong case for arguing that modern payment systems are just a new twist on cash.

By enabling mass publishing, the Gothenburg Press laid the foundations for radio, cinema, television and, indeed the internet, as well as facilitating research and development of all kinds.  The availability of reading matter made it easier (and cheaper) for people to learn how to read and hence encouraged the literacy we take for granted today.  So even though the Gothenburg press itself is now simply a piece of history, it was what enabled numerous inventions which are now an integral part of our daily lives.

In its early days, the two-wheeled cycle we now know was simply a practical means of transport, but in its own quiet way, it went on to revolutionise the world.  It has long been used to help alleviate poverty and played a major role in the emancipation of women starting in the late 19th century, when the feminists of the day referred to is as the “freedom machine”.  Like many of the other inventions mentioned, the bicycle also laid the foundations for car manufacture and the aviation industry.  It was the metalworking techniques developed by bicycle manufacturers, which permitted the creation of these, more advanced, forms of transport.  Today the bicycle is still prized for many reasons, including the fact that it is healthy, affordable and environmentally friendly.