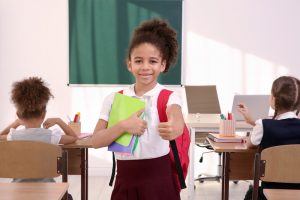 You’re never too young to learn about copyright law, at least that’s the opinion of the Intellectual Property Office (IPO), which has produced a series of educational tools aimed at teaching primary-school-age children about copyright law and the importance of following it.

What exactly is on offer?

From what has been made public so far, the lessons seem to be based around a series of 5-minute cartoons centred around the adventures of bulldog Nancy and her band Nancy and the Meerkats.  Nancy has to fend off her arch rival Kitty Perry, who wants to steal her ideas and as she does so, she and her manager Big Joe teach characters and viewers about various aspects of copyright law.  Nancy’s friends include characters such as Justin Beaver and Ed Shearling.  Some of the cartoons are already available (legally) online so adults can judge for themselves what they think of them, although, of course, the real test will come when they are shown to their intended audience of key stage 2 children, aged between 7 and 11.  The IPO itself has admitted that the topic is “dry” and “niche”, which does not sound like an ideal foundation for educational materials aimed at younger children, but then much the same could be said about tax and HMRC’s cartoon and supporting educational resources, explaining taxation to a similar age group (8 to 11s) has been well-received by the teaching profession.

Why has the IPO produced this material?

According to the IPO “respect” for copyrights and trademarks is a “key life skill”.  In their media communication they state that they have undertaken educational outreach with teenagers and have noticed that teenagers are already showing a disregard for intellectual property.  Essentially, they are hoping that by teaching children about copyright at a younger, more impressionable age, they will have learned respect for intellectual property by the time they reach their rebellious teenage years and that this will instill good habits in them for the rest of their lives.

The importance of social media and the age at which children begin to access it may also have factored into the IPO’s decision.  While today’s generation of parents probably saw the birth of the internet long before the birth of their children, today’s children are growing up with the internet as part of their lives and so there is arguably a strong case for saying that teaching them how to navigate their way around it is as important as teaching them how to cross roads.  There is little dispute that children need to learn about online safety as early as possible, so you could take the view that teaching them about the importance of respecting intellectual property is a combination of teaching them to protect their own safety (and avoid being prosecuted for piracy) and teaching them basic good manners (respect for others).

How has the material been received so far?

It’s very early days, but already the IPOs scheme has come in from criticism, for being both heavy-handed and inaccurate.  For example one episode explains that illegal downloading is the same as stealing from a shop.  In actual fact, the law (currently) treats illegal downloading as a civil offence whereas theft is a criminal one.  For those who might be tempted to argue that this is splitting legal hairs and that in spirit they are the same offence, it’s worth noting that physical items can only be sold once whereas there is really no limit to how often a person can sell digital copies of a product, so although both actions have a negative impact on the lawful owner of the item, the extent of the impact may be very different.

It’s little things like this which set the cartoons off on an initial back foot, but it’s important to see that the need for this style of education has been met and that copyright is deemed important enough to reach mainstream education.